There is more information on slide 2!

MLA 8 is the latest style guide from the Modern Language Association, and this is the citation format we use at NSHS High School for all papers.

For help in formatting your entire paper, check out the guide here: https://style.mla.org/mla-format/

For a guide to the MLA works cited page, check out the guide here: https://style.mla.org/works-cited-a-quick-guide/

Below is a practice template you can use to manually build a citation from scratch. See the link above for more detailed descriptions and examples. Use the punctuation displayed in the template to create your citation.

A bibliography is "a list of the books referred to in a scholarly work." Newton South High School follows the Modern Language Association (MLA) format for bibliographies. Because the word "Bibliography" implies books, and students often use non-book, non-print sources in their work, MLA has a different title for bibliography: Works Cited. A Works Cited contains an alphabetized list of citations for all the works you will cite in your text. Pay close attention to punctuation, indention, and spacing. Every detail is important. Following these guidelines will ensure that your bibliographic format is correct:

See the example Works Cited below to see what it should look like.

A Works Consulted title indicates that the list is not confined to works cited in the paper. In other words, perhaps you consulted a particular source when doing your research, but you ultimately chose not to quote the source, or to paraphrase an idea you gleaned from the source in your paper. If you include the citation for this source on your source list, then the title for this list should be Works Consulted vs. Works Cited.

Annotations vary in length from a few sentences to several paragraphs depending on the assignment and the source itself. Seek guidance from your teacher about expected length if it is not already obvious based on the assignment.

Annotations appear following each source citation. They are double-spaced, with an extra line-break in between the citation and the annotation.

Here is an example annotated citation:

"The First Industrial Revolution: Why It Started in Britain." The Industrial      Revolution in Europe, 1750-1914, edited by James Farr, Detroit, Thomson/      Gale, 2003, pp. 338-41. This source is a specialized encyclopedia devoted      to the industrial revolution in Europe from 1750-1914. This is a high      quality source. I used this source to learn more about why the industrial      revolution started in Britain, and the reasons provided in the source are      very detailed and seem consistent with other sources. I used this      information to address my thesis by comparing this to the development of      the industrial revolution in other parts of the world.

Below you will find some basic examples of how to create in-text citations for the most common source types.  For a complete list of more complicated examples we recommend the Purdue OWL (Online Writing Lab) website "MLA In-Text Citations: The Basics."

For video tutorials on how to create in-text citations, scroll to the bottom of this page.

In-text citations for a print source with a known author

Human beings have been described as "symbol-using animals" (Burke 3).

Human beings have been described by Kenneth Burke as "symbol-using animals" (3).

Note that the in-text citations are at the end of the sentence, that the period for the sentence appears after the parentheses, and there is no p. or pg. notation -- just the page number 3.

In 2014, the Huffington Post claimed Mansa Musa was “the richest person ever…worth a staggering $400 billion, after adjusting for inflation…” (Bennett-Smith).

We see so many global warming hotspots in North America likely because this region has "more readily accessible climatic data and more comprehensive programs to monitor and study environmental change . . ." ("Impact of Global Warming").

Note that you do not include The (or A or An) in the article title of the in-text citation, and you do not need to write the whole title -- an abrreviation is fine as long as it is clear which source you are referrring to from your Works Cited.

In-text citations for sources that have the same title as another source you are using.

After Luther was declared an outlaw and sentenced to death, he was saved by Frederick the Wise who had him kidnapped ("Martin Luther," Encyclopedia of World Biography).

Martin Luther’s family must have had some wealth because they were able to send him to school without any financial aid ("Martin Luther," New Catholic Encyclopedia).

In-text citations for a primary source you found in a secondary source:

For indirect quotations, use "qtd. in" to indicate the source in which the original source was quoted.

Ravitch argues that high schools are pressured to act as "social service centers, and they don't do that well" (qtd. in Weisman 259).

To cite multiple sources in the same parenthetical reference, separate the citations by a semi-colon:

WHEN TO USE IN-TEXT CITATIONS

An in-text citation is used to give credit to a source for its information.

An in-text citation is NOT needed when you are using common knowledge, familiar proverbs, or well-known quotations. Common knowledge is general in nature and is found in more than three sources.  ex: Christopher Columbus first sailed to the Americas in 1492.

"A primary source is a document or physical object which was written or created during the time under study. These sources were present during an experience or time period and offer an inside view of a particular event. Some types of primary sources include:

Examples of primary sources include:

Adapted from Ms McNally/NSHS History guidelines for writing and citation: 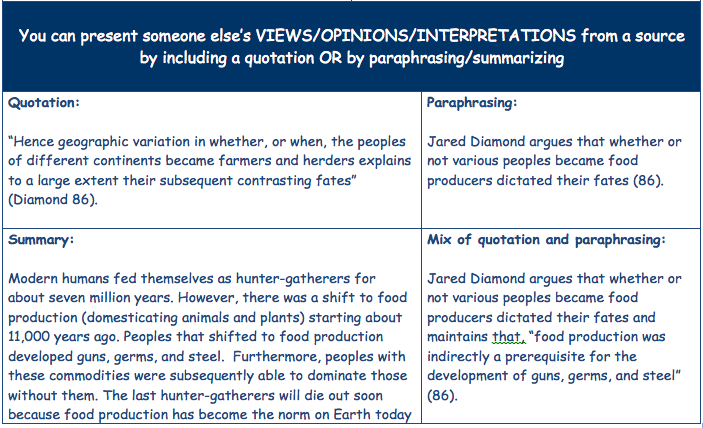 The above quotations are taken from the following source: 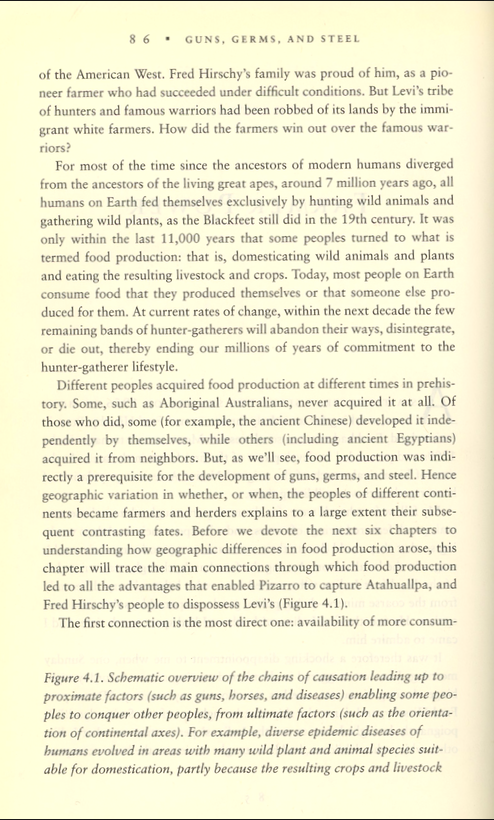 Thanks to Heather Hersey from the Lakeside School in Seattle, WA for creating this helpful tutorial video for how to paraphrase!